Aroldis Chapman: What do you think? 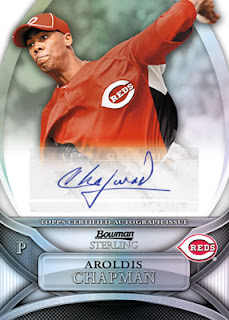 Ok I live in Ohio and we, and I guess any other home town team fan, are very quick to drink our team's Kool-Aid and get excited about any little thing pertaining to us. So if you can look past the fact that I am a Reds fan and give me your honest thoughts, it would be appreciated.
Earlier today Yahoo Sports broke a story on Reds pitching prospect Aroldis Chapman, which can be found here http://sports.yahoo.com/mlb/blog/big_league_stew/post/Report-Scout-clocks-Reds-pitching-prospect-Cha;_ylt=AnmBUMFhgwVbaH3dSwP9M3SrO4d4?urn=mlb-265783. Reportedly the kid was clocked throwing at 105 mph. That speed sounds crazy to me. It excites and scares me as a fan. The idea of Chapman fanning batters while throwing pitches at the speed of sound is great. Although as we all know with the recent news of Stephan Strasburg pitchers are very fragile.
First of all, what does this mean for the Reds? I'm wondering if we'll get to see a little of this guy when rosters expand in September. To be honest I don't know a great deal about him. Obviously the guy throws heat but early on I heard he was having some control issues. In the very game when the mythical 105 mph pitch was thrown, Chapman faced three batters retiring all of them swinging. 16 pitches 11 of which were strikes. Not too shabby. Should Reds fans get excited about him or is it too early to tell?
Secondly, what does this mean for collectors? In earlier posts I've stated that I personally think putting stock in pitchers is very iffy do to the risk of injury. A tweak to a pitcher's arm is a much bigger deal than a tweak to a first baseman's arm. With that said, should collectors buy early before he gets hot? His cards are relatively inexpensive if we're comparing them to the likes of Strasburg, Harper and Heyward. Needless to say, yesterday even before this story broke I bought a couple of his Bowman Chrome rookie cards cheap. Maybe I'm on to something or maybe it'll be a flop.
What do you guys think about Aroldis Chapman both as a player and someone to collect?
Posted by Dan Ketterman at 4:58 PM 2 comments:

I've updated my "Want List" and "For Trade Lists". Please feel free to ask if you don't see what you want. I've only just started listing stuff so they'll be more to come. Comment on here or e-mail me at dan.ketterman@gmail.com
Posted by Dan Ketterman at 8:41 AM 4 comments:

Scary for Those Dropping the Big Bucks on Strasburg Cards

Strasburg will travel to the West Coast for a second opinion, but Rizzo anticipates the 22-year-old right-hander will need the operation that requires 12 to 18 months of rehabilitation.

Stephen Strasburg would have only 12 starts when and if he has reconstructive elbow surgery, a routine procedure in recent years. How others have fared after the operation:

"I look at the bright side," Rizzo said. "Tommy John surgery is a surgery that we've had great success at. The success rate for guys coming back from Tommy John and retaining their stuff is very good."

Strasburg was pulled from Saturday's game at Philadelphia when he grimaced and shook his wrist after throwing a changeup.

The Nationals initially called the injury a strained flexor tendon in the forearm, but an MRI taken Sunday raised enough questions for the Nationals to order a more extensive MRI in which dye is injected into the arm.

But he has had medical setbacks along the way, despite the team's best efforts to be as cautious as possible with their prized youngster. He was placed on the disabled list a month ago with inflammation in the back of his right shoulder. He was making his third start since returning from the DL when he had to leave the game against Philadelphia.

Copyright 2010 by The Associated Press

Posted by Dan Ketterman at 9:05 AM No comments:

Strasburg, Is He Valued a Little Too High? 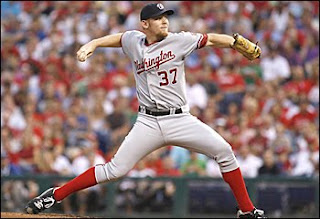 Is the hobby world putting a little too much stock in Stephen Strasburg? Don't get me wrong I think he is going to bea great pitcher. In his 12 starts he hasn't looked too bad.
2010
The guy throws hard and he throws a lot of strikes. But as we allknow pitchers are a little more fragile than your typical field player. He was just put on the 15-Day DL. I wonder if this is going to be a reoccurring thing that happens because of the type of pitcher he is.
http://sports.yahoo.com/video/player/mlb/Y_Sports_MLB/21568861
I know one could point at a guy like Greg Maddux w
ho pitched for close to 100 years and say he'll be fine. But Maddux was a different type of pitcher. Who is to say that Strasburg want change as he matures as a pitcher? Maybe he'll be fine throwing the gas that he throws the rest of his career. But what if he has 3 or 4 years plagued with injuries and he's done?
I guess I don't understand why all of the hype for pitcher whose career, to me, seems like more of a shot in the dark than a guy like Jason Heyward. The value of Strasburg's cards are crazy right now some even going for thousands of dollars when Heyward's cards are considerably lower. For a guy, like myself, that can't drop high dollar money on sports cards but still wants to be able to collect and turn a profit Heyward seems like the best buy at the moment. I don't know I might be crazy but this seems like the safe bet hands down. I'd like to hear what you think about this. 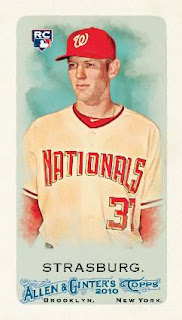 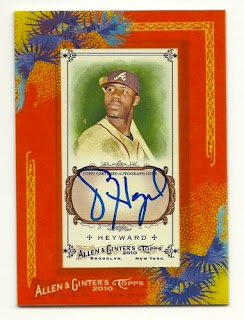 Posted by Dan Ketterman at 8:41 AM No comments:

Dan Ketterman
Springfield, Ohio, United States
I'm an amateur hunter at best but I'm guessing that this is you as well. I don't have thousands of acres to hunt like we see on the Outdoor Network. So this blog will be dedicated to the everyday hunter, the successes and the struggles.

Collecting Blogs To Look At